” I haven’t enjoyed a read
as much for ages! “
John Considine; Actor,
Director, Screenwriter.

SNAPSHOTS FROM THE ROAD (October 2011)

As the title suggests, this book is a collection of transient snapshots – short reminiscences of events, some significant, some whimsical, taken along the myriad roads author Alan Mowbray Jr. has traveled during seventy seven years of perpetual motion.Although not a cook-book, a few of his stories include recipes – memorable dishes or meals that relate in some way to the narratives they accompany – they confirm his life-long affinity for tasty food.

Readers may also discover that they are already familiar with a few of the characters he was lucky enough to ‘bump-into’ along the road.

If you watched Robert Altman’s award-winning 2001 film “Gosford Park,” you may recall the scene where Morris Wiesman the Hollywood film director, shouts into the telephone: “Get Me Alan Mowbray,” after being asked by his producer what he needed most to make the film “Charley Chan in London” successful. For almost half a century the phrase “Get me Alan Mowbray” was a familiar demand by many a movie maker hoping to cast the perfect actor in a pivotal role in a film. Alan Mowbray was a British-born actor whose popularity with movie fans has endured to the present day, Thanks to cable TV networks. His movies are being seen again by those who fondly remember his work in film, and by a new generation of viewers who are enjoying his work for the first time. He appeared on Broadway in a series of plays in the late nineteen twenties, before succumbing to the lure of Hollywood, where he appeared in nearly two hundred films spanning the nineteen thirties, forties, fifties and sixties. With nine other actors, he founded the Screen Actors Guild in 1933. As the epitome of the “British stiff-upper-lip” school, he was much in demand, making as many as four or five moving pictures a year.for over forty years. His last movie appearance was in “A Majority of One” (1961) with Alec Guiness and Rosalind Russell. He died in Hollywood at the age of 73 in 1969. So, these are ‘Scenes From An Actor’s Life’, Alan Mowbray’s autobiography, with added ‘dialogue’ by editor Alan Mowbray Jr.(stories, photos, fan magazine interviews) spanning the ‘Golden Age’ of film history. 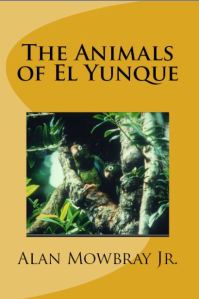 This book is the end product of ten years of painstaking compilation. What began as a monthly ‘Wildlife Facts’ feature for the El Yunque National Forest’s website in January, 2002 eventually comprised over 100 individual descriptions and full color illustrations of the rainforest’s animals. It seemed a natural progression to convert this remarkable collection into a ‘portable’ guide-book that would fit easily into a jacket-pocket or book bag… The Animals of El Yunque is a ‘pictorial natural history’ – it is not a comprehensive listing of every wildlife species that occurs in El Yunque – instead, it is an effort to describe a discrete selection of the animals that forest visitors might encounter and thus wish to identify while experiencing El Yunque’s unique and exhilarating surroundings. Tropical forest enthusiasts and natural history ‘buffs’ will also be fascinated to discover the immense diversity of the animal populations that are described and pictured in full color on these pages – all of which thrive in America’s only tropical rainforest.

This book is the end product of ten years of exploration that began with a series of three small guide-books written to help El Yunque National Forest visitors discover and identify some of the forest’s many ecological marvels. These small reference books included descriptions of 57 individual tree species. Between 2010 and 2012, a monthly El Yunque National Forest website feature ‘Endemic Plant Facts’ amassed an additional 26 indigenous tree descriptions. Combining this significant collection of 83 specific portrayals (accompanied by full-color photos and illustrations) into a single, portable guide-book, similar to its predecessor ‘The Animals of El Yunque’, that would fit easily into a jacket-pocket or book-bag, and available as an ‘e-book’ and ‘Smartphone App’ seemed like a sensible idea.

THE DAY IT RAINED FROGS IN THE FOREST (October 2013)

The captivating story of Kiko and Koko, two plucky Coqui tree frog brothers, and their zany adventures in Puerto Rico’s lush El Yunque rainforest. Along the way, you will meet their girlfriends, Sila and Sula, their parents Kono and Sana and Mordo, the evil tarantula that seeks to hunt them down. You’ll also encounter a few other remarkable rainforest animal characters.

A gentle and compelling mixture of fun and natural history with a surprise ending.